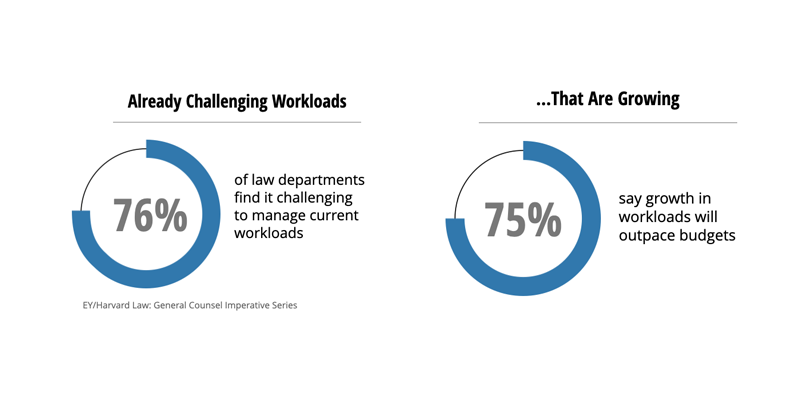 If yours is like most Corporate Legal Departments, you are already swamped with work, and the volume just keeps rising. The hours are long, and getting longer, and help might not be on the way.

Most budgets are not keeping pace with the increasing workloads, so the immediate effect is even more hours for the team, building resentment from internal clients who were already unsympathetic, and yet more pressure to perform from management. The bigger the shortfall in funding the more pressure that falls on the existing team, and despite heroic efforts, performance will fall and delivery times will lengthen. The very opposite of what is being asked for by Management.

The first thing you should know is it’s not your fault. You are caught in a classic doom loop; a self-reinforcing negative feedback loop that continues to drive-down performance and drive-up your working hours because of systemic under-investment.

The longer the under-investment continues, and the bigger the investment shortfall, the worse it gets for the team. The problem is the funding decision process, not your team’s individual performance.

When the investment shortfalls are small, the negative feedback loop can just make things more of a drag than they have to be; bearable, but not ideal for high-performing team members.

When the shortfalls are large in comparison to the work volume increases, or continue year-after-year, CLD performance can plummet, turnover can grow, and the stress can be significant (along with a host of other second order effects on the business like slowed cash-flows, higher risk, etc.).

How the Mechanics Work

You may see some of these components at play for your operation. Or you may see you operation described to a t. It’s likely somewhere in the middle. Whatever the case, you’re probably not operating in an optimal performance state or you wouldn’t be here. The fact that none of this is your fault, and you’re already working flat-out, doesn’t do much to ease your pain. We’re sorry you’re having to deal with this. It isn’t fair or just in any way.

In future posts, we’ll outline our methodology for escaping this negative loop. If you can’t wait that long, drop us a line and we’ll help however we can.

If you’re an in-house counsel, there is little doubt that you are an expert in legal matters. You have the education, experience, and battle scars to...

If yours is like most Corporate Legal Departments, you are already swamped with work, and the volume just keeps rising. The hours are long, and...

There are a host of reasons why our work hours continue to climb, even before the pandemic blurred the lines between work and non-work hours. One of...